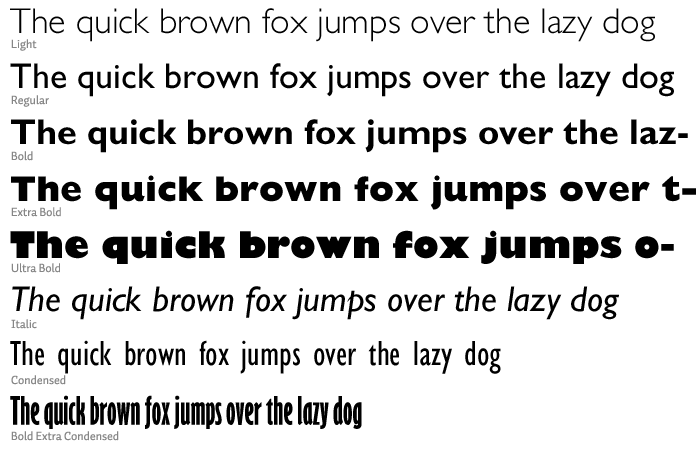 The font, Gill Sans, is very geometric. Perfect circles, equal strokes, perfect squares. If each letter was seen as a silhouette, it would resemble a shape.The typeface is also very symmetric and has equal strokes. However, the typeface is very inconsistent when it comes to their weights.

At first glance, Gill Sans Light and Gill Sand UltraBold do not look like they derive from the same typeface.The weight, shapes, and strokes are inconsistent than what you would see in a typeface like Helvetica, for example, where the features of the typeface are all the same, they simply look thicker (or thinner).
For example, the lower case g for the UltraBold weight is an entirely different form than that of the other weights.There are also minor differences such as the shoulder of the r, and the title (j and i).The shoulder on the UltraBold lowercase r is more curved and circular, where as the other weights are boxy and end with a straight edge.

There is also a small head serif that can be seen in certain letters such as the lowercase b and q from both the Bold and the condensed weights. Just like the UltraBold, the Bold Extra Condensed also differs from the rest of the weights.This can be seen in the lowercase a, where it is a drawn without the terminal coming out from the top, which is sometimes regarded as a simpler lowercase a.

The similarities of the weights can be seen through the letter o (except for the italics and condensed), because of it’s perfectly symmetrical shape.