AN ESSAY ON TYPOGRAPHY: Work Analysis 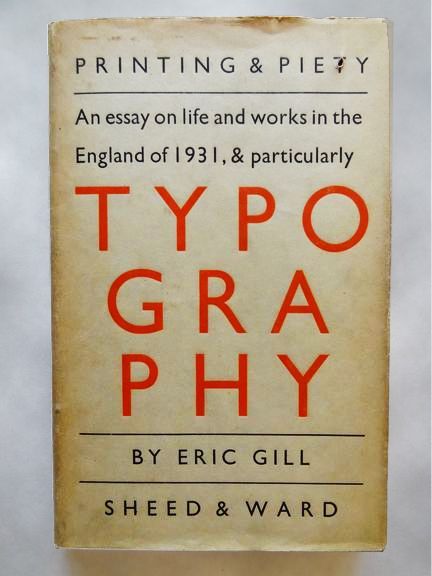 The cover for his book, An Essay on Typography, was handset by Eric Gill himself. He only uses one stroke weight, but there are various sizes.The words are also very widely spaced (both tracking and leading).The usage of the white space puts more emphasis on the words on the page.

The word Typography is the largest, and printed with red ink.This brings more emphasis on the word.The word is divided into three parts, which creates an inverted triangle shape.The rst part “Typo” is at the top, with “gra” and “phy placed under. It is divided this way with “typo” being the longest of the three because it is the latin word for type.The letter spacing (tracking) appears to be less than 1.5em.

The phrase “Printing & Piety” is in all-caps, and is slightly larger than the phrase below. Because it is at the top of the book, it is the second or third thing you read and is categorized as the subtitle. His name and the publishing company’s name are both in all-caps, the same size as the phrase, but they are placed on the bottom of the cover. The extended title of the book, “An essay on life and works in the England of 1931, & particularly” is in both lower and uppercase letters. It gives more information about the book, but is not necessarily the most important piece of information, so it is the smallest and least emphasized part of the cover. Original book cover by Eric Gill. New book cover by Penguin.